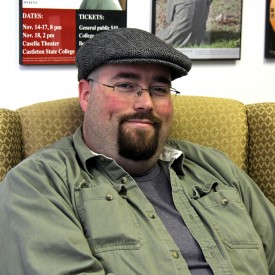 Steven Gross began work at Castleton University as the head of the Technical Theater and Design program in the fall of 2007. He serves as the Technical Director for all Theater Arts productions, the resident Scenic and Lighting Designer, and mentors student designers in the various design areas. Mr. Gross oversaw the creation of Castleton’s new Black Box Theater, Design Studio, and the launch of the Black Box Series in 2012. Mr. Gross teaches courses in Stagecraft, Introduction to Theatrical Design, Scene Design, Lighting Design, Advanced Design, Scenic Painting, Stage Production, Stage Management, and Stage Rigging and Metal Work.

Prior to his work at Castleton, Mr. Gross served as the Performance Lab Supervisor for The University of South Carolina’s Lab Theater. During his time there he managed all the areas of technical production and mentored students in more than twenty productions including Hedwig and the Angry Inch, Lysistrata, Women and Wallace, and several original student works. While there he also designed and oversaw the construction of the new design studio for computer and hand drafting classes.

Mr. Gross has worked with a number of professional organizations across the country including The Middlebury Actors Workshop in Vermont, The Talking Band and La Mama Theater in New York, Trustus Theater in South Carolina, SEGUE Theater Group, New Directions Theater, and The Tennessee Valley Arts Association in Alabama.