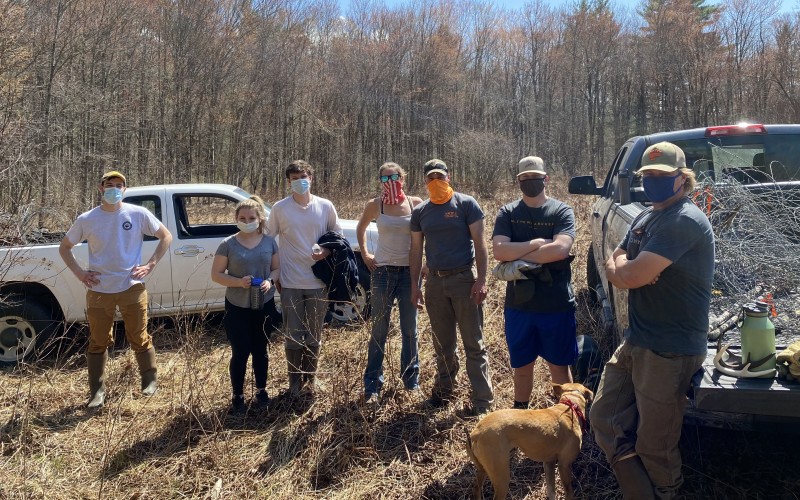 The area, which covers approximately 1,140 acres in Rutland County, is home to a variety of waterfowl, amphibians, and reptiles, and is used recreationally for fish and wildlife-based activities like hunting, fishing, and trapping. Most of the WMA is forested but contains more than 250 acres of wetlands. It is managed by the Vermont Fish and Wildlife Department.

Castleton’s Backcountry Hunters and Anglers Chapter used funds awarded through BHA’s Public Landowner Stewardship Fund to plant an additional 40 tree seedlings and beaver guards to support the work of the larger habitat restoration project happening at the Otter Creek Wildlife Management Area. The goal of the grant is to connect BHA college chapters with their communities and give students the experience of applying for a grant.

The National Wild Turkey Federation, Vermont Fish and Wildlife Department, Arbor Day Foundation, and Otter Creek Natural Resources Conservation District planted 3,800 stems in April as part of the larger restoration project. In total, over 600 yards of fencing has been removed from the area.

Castleton’s Backcountry Hunters and Anglers Chapter was established in March 2020 by students Adam Mitchell, Spencer Como, Olson Humphrey, and Denis LeCours. Backcountry Hunters and Anglers work to preserve hunting and fishing in a natural setting, using education and public service in public lands, waters, and wildlife. The group was first formed in late 2019 and has hosted several events including ice fishing and other wildlife management projects.

The restoration project was a year in the making for Castleton’s BHA Chapter.

“We reached out to Matt Breton, who oversees Vermont BHA, and two wildlife biologists we had worked with in the past asking if anyone had a small project we could use this grant for. Joel Flewelling, a wildlife biologist for the State, got back to us saying that he had plenty of small projects in Birdseye, Pomainville, and the Otter Creek Wildlife Management Area,” said Como, who serves as vice-president of the student group. “Initially, I wanted to do a project in Pomainville because it's where I go duck hunting, and I think there could be some more planting along the river.”

Flewelling reconnected with the group and asked if they would be interested in Otter Creek instead, noting how some of the saplings planted in 2020 had died as a result of a drought.

“Basically, if we could replant some of the dead trees, it would be more beneficial because $500 in trees and beaver guards only gives you 34 trees, which is nothing for a restoration project planting. This way, replanting what had already died would be more beneficial,” Como said. “About this time, we heard of an issue with an old, barbed wire fence that needed to be taken down after it injured some hunting dogs grouse hunting. Then on further inspection, you could see wildlife was also getting hung up on it. When I went, there was a bear in there feeding on silky dogwoods, and you could see where it would have to plow through bushes until it found an opening in the fence to cross it.”

12 volunteers and two biologists from the Vermont Fish and Wildlife Department attended the work day. According to Como, conservation days are important for BHA because of its focus on protecting access to public land through legislation and projects like the Otter Creek restoration project.

“It is really simple: if you take from the resource then you should give back to the resource. We want to make sure everyone can enjoy healthy wild places for fishing, hunting, bird watching, harvesting wild plants, or hiking. Making sure we take time to pick up trash, remove invasive species, and improve the wildlife carrying capacity of the land is important to us,” he said. “That is where this project was a grand slam for the budget that we had. Because the Otter Creek WMA river banks were heavily eroding from the lack of trees and shrubs. This affects the water quality that towns get their water from. Adding more native plants on the banks helps to stabilize the banks, mitigate pollution, and increase habitat value. Then removing the fence made traveling the woods safe and easy for wildlife and those enjoying the woods.”