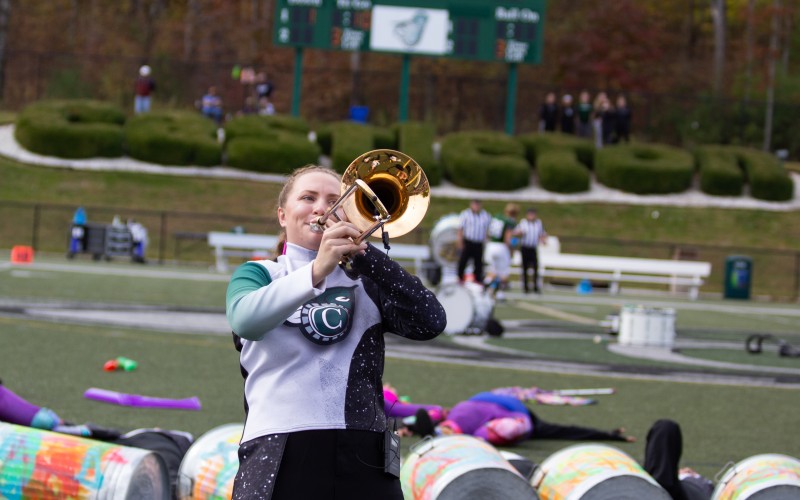 Castleton University student Carley Patch will join one of the country’s elite drum corps this summer.

Based in Boston, Massachusetts, the Boston Crusaders is a world-class competitive junior drum and bugle corps. Boston Crusaders is a founding member of Drum Corps International and the third-oldest junior drum and bugle corps in the country. The group includes brass players, percussionists, and color guard members under the age of 22 who travel over 10,000 miles each year to perform for over 300,000 fans.

Boston Crusaders have begun their past six seasons at Castleton University, where they spend approximately three weeks preparing for their summer tour. They end their stay with a preview show for the community.

“I had the opportunity to watch rehearsals at Castleton during their spring training and their preview show that Boston puts on before departing for tour. The level of athleticism and musicianship that I was able to experience was mind-blowing. I was immediately sold on the activity,” Carley said.

A senior Music Education major from Walpole, New Hampshire, Carley is a member of Castleton’s Athletic Bands. A trombone player since the fifth grade, she never planned on continuing to play after high school, but a meeting with Coordinator of Athletic Bands during registration weekend changed her perspective.

“Music is something that never leaves your heart. Even though I began at Castleton as a different major, music was always there. I think that my love of music plus the influence of my role models caused me to end up here as a music education major. I am excited to become a teacher so I can hopefully inspire the next generation to work hard and pursue their dreams as well,” she said.

After completing her marching season with the 7th Regiment Drum and Bugle Corps in 2018, she was encouraged to march again and to push herself. That’s when the idea of auditioning for the Boston Crusaders first came up.

Carley’s experience with Athletic Bands and other opportunities have prepared her to be the first Castleton student to perform with the group.

“We use the same dance techniques, drill writing, and music as DCI groups do. During my time as Drum Major and as a music work-study student, I was also able to learn about the processes of writing shows, the methodology behind it, and how to teach these skills to members of the band,” she said. “I was able to understand the how and why behind DCI-style shows; this helps me to be a better marcher and musician myself.”

Carley is looking forward to representing Castleton University and Vermont as a member of Boston Crusaders.

“I look forward to making friends who share a common interest in DCI and growing my musicianship,” she said. “As the first Castleton student and one of very few Vermonters to march DCI, I am honored to have the opportunity to represent the University that has helped shape me into the person I am today.”