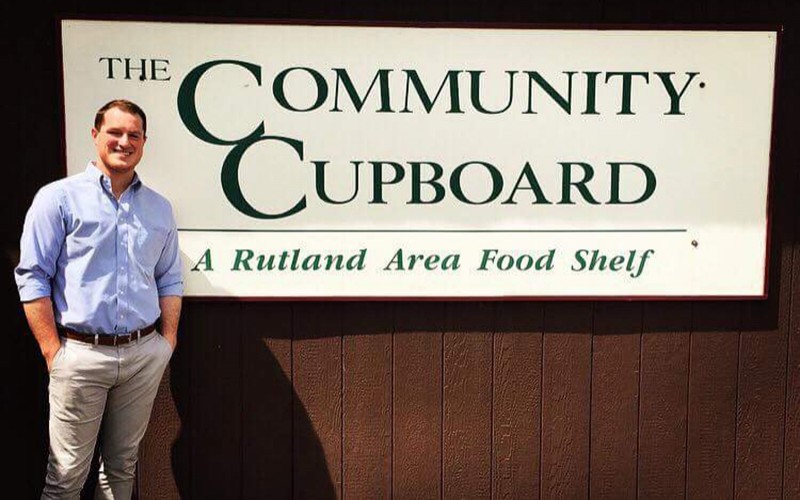 Castleton alumnus Dan Warnecke ’17 left a lasting legacy within the Castleton community and has now moved on to make a positive impact in the local Rutland area. After earning a Bachelor of Science in Business Administration with a concentration in Marketing and Management, Warnecke recently accepted the position of Executive Director at the Rutland Community Cupboard.

“I've always had a passion for helping others and a passion for supporting nonprofit organizations,” explained Warnecke, who moved to Vermont with his family in 2005. “This position not only allows me to stay within the region that I love and believe in, but it also allows me to serve my community. I decided to stay and work in Rutland County because I saw a future in this region.”

In his new position, Warnecke is tasked with running and managing the day-to-day operations of the Rutland non-profit organization. Providing complete oversight for the cupboard, his routine duties include coordinating fundraising events, developing operating and financial reports, and applying for grants, in addition to various other marketing and public relations responsibilities.

While at Castleton, Warnecke was noted as an outstanding student, both in and out of the classroom. He received regular recognition on the President and Dean’s Lists, earned the Outstanding First-Year Student Award, Community Service Award, and the Commuter of the Semester Award, as well as attained the Presidential Scholarship Recipient designation for Business Administration.

His extracurricular activities included holding the position of Senior Class President for the Class of 2017, being an active member of the Castleton Rotaract Club, Castleton Business Club, and Castleton Student Support Network, and serving as a delegate for the Student Government Association.

“I was involved in these programs because they gave me an opportunity to serve my local and global communities,” said Warnecke. “Nothing beats the feeling you get when helping others, and I've always been brought up with the belief that you should think of others before yourself, especially those in most need.”

Looking back at his time at Castleton, Warnecke feels nothing but support and pride.

“I feel that Castleton did an excellent job of preparing me,” he said. “I learned about the importance of community service while attending Castleton, and I will never forget all the good that Castleton allowed me to do while obtaining my bachelor’s degree.”