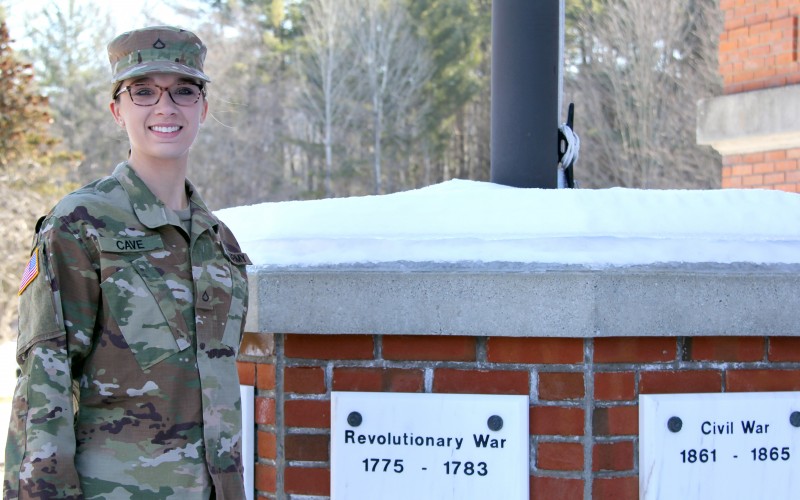 When Noelle Cave enlisted in the Vermont Army National Guard, she didn't know she was making history.

Cave, a senior Criminal Justice major from Bennington, Vermont, will become the first female 19D Cavalry Scout to enlist in Vermont. The Army views Calvary Scouts as its eyes and ears. They engage with the enemy in the field and track and report their positions, vehicle activity, and weapons. She will serve at A Troop 1-172 Mountain Cavalry in Newport, Vermont.

Cave said she was pretty excited when her sergeant told her that her enlistment was a first. She said she wanted an intense job that was combat-related, and they presented this opportunity.

"It makes me really proud of myself. I want to be an influential example for other females that they can do this, too," Cave said. "It wasn't until recently that females can join a combat MOS (military occupational specialty). “One of my many goals is to be an inspiration and role model for others to go out of their comfort zones, especially females.”

Cave said several things factored into her decision to enlist. She was looking for a challenge and valuable experience, and the Guard provided an excellent package of benefits. She received a $20,000 sign-on bonus, and the Guard will cover her student loans.

She is enlisted as an E3 Private first class and will be promoted to E4 once she completes her bachelor's degree.

"I wanted to join the Guard because you can't find those benefits anywhere else," Cave said. "Since I am a criminal justice major, I want to go into law enforcement, so this was good preparation. I was looking for something physically and mentally challenging, and this will probably be the hardest thing I do in my life."

Cave originally planned to enter law enforcement upon graduation but is now eyeing the military as a career option. Among her goals is to go to Officer Candidate School and obtain her airborne wings.

"I'm glad I'm getting the military experience before going to the State Police. Military experience is really huge," Cave said. “The Army is taking me in a direction that I didn't expect in a positive and exciting way."

She also has designs on returning to school. She is interested in entering Castleton's online MBA program, and she could see herself returning to complete a nursing degree after a career in the military or law enforcement.

While she ponders her future, she remains an active member of our campus community. She serves as vice president of Habitat for Humanity Club and recently applied to become a member of Pi Gamma Mu, the International Honor Society in Social Sciences.

She has received tremendous support from her family as well as the Castleton community.

"I love Castleton. Castleton's community has been an inspiration because I love making the difference I want to see," Cave said.

Cave said the campus is fortunate to have David Kitchin on campus as a recruiter. She said if she gets nervous or has any questions, she can pop in and ask.

"With the Guard, I know that I am going in a direction that I want to go in. The Guard makes me feel secure with my future, and I know that no matter what, the Army has my back," Cave said.