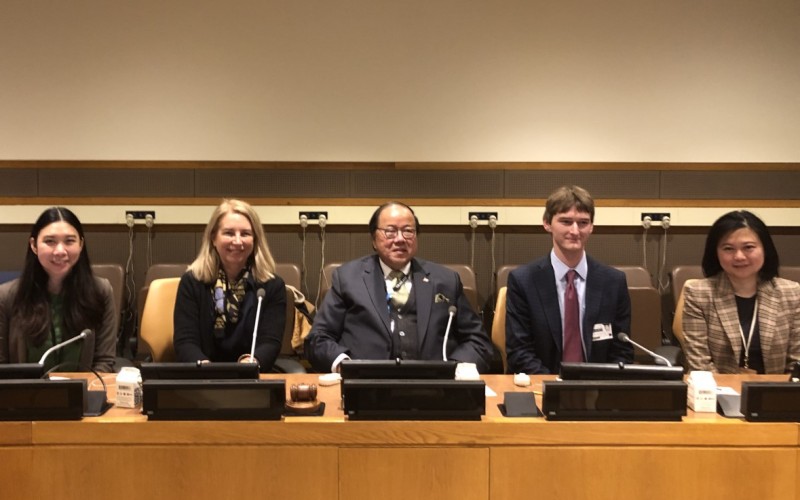 Biology student Avery Cox addressed his concerns before a United Nations panel for soil erosion’s impact on Vermont agriculture when he spoke at the Food and Agriculture Organization’s World Soil Day in December.

Created in 2002, World Soil Day is an annual event that brings attention to the importance of healthy soil and advocates for the sustainable management of soil resources.

Having been raised on an organic vegetable farm in West Rutland, Vermont, Cox told the panel the noticeable differences in rainfall intensity over the last decade, making erosion a relatively new issue for his family.

“Storms that used to last a day seem to now be over in only an hour or so, dumping the same amount of rain in a much shorter time,” he said.

Cox followed with the devastating consequences these torrential downpours have on farming practices.

“This makes seeding and transplanting a challenge and a risk,” he added. “One rainstorm could wash away it all.”

The Castleton student was invited to speak at the U.N. to share his experiences as a Vermont farmer in order to address the issues of soil erosion on the local level. His family farm, Boardman Hill Farm, grows organic produce.

“Vermont is a rural state, one of the most rural in the U.S.,” Cox said. “This means that it has one of the highest percentages of people earning their livings through farming.”

Cox is currently working with Assistant Professor Dr. Christine Palmer and a team from Dartmouth College to identify mycorrhizal fungi. He said it has the potential to create underground hyphal networks that bind soil as well as to aid in reducing carbon dioxide in the atmosphere.

Cox added that reducing tillage and cover cropping could be another solution to diminishing fertility and nutrients.

“This will allow the soil to be kept locked together within the roots as well as reduce the loss of soil organic carbon,” he said.

Last summer, Cox worked at the prestigious Hubbard Brook Experimental Forest in New Hampshire as a paid researcher with the Dartmouth team. Cox and Palmer are finalizing a manuscript on this work, and he has pioneered a microscope technique to generate high-resolution stacked images of beneficial fungi growing on roots.