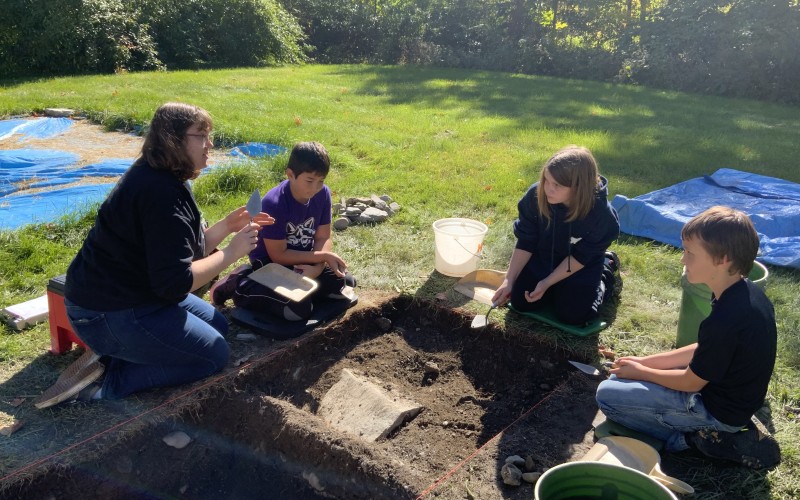 In Vermont, there is history all around us. Sometimes it's hidden in plain sight.

This fall, 280 students and teachers from local schools visited Granger House, including students from Castleton, Fair Haven, Benson, Orwell, Rutland Town, Proctor, and Cavendish. In the coming months, even more area students will make trips from schools such as Poultney Elementary, West Rutland, and Rutland City Intermediate School. The field trips are organized by Castleton's Hidden History Project, which aims to explore the lives of people in and around Castleton through faculty and student research.

"We think it is really important to expose kids to history that is literally right in their own backyard. Many children don't study Native Americans, or if they do, they often don't get to learn directly from a member of that community. And learning about history is different when you are getting your hands dirty and discovering the evidence left behind by people who might have lived hundreds of years before you did," said Ellen Moriarty, Outreach Coordinator for the Castleton Hidden History Project. "Kids learn that historical and cultural remains are important, and should be cared for as a resource that everyone can learn from."

Students taking a field trip to Granger House participated in a three-part program.

First, they spent time with Roger Longtoe Sheehan, chief of the Elnu Abenaki. Roger shared traditional songs, stories, items from Abenaki culture, and information about the history of local Native Americans. Students then received a house and property tour, focusing on Castleton University student research. And, students got to participate in ongoing archaeological work at Granger House, including excavation, screening, and analyzing artifacts. The trips also expose students to cutting-edge 3D and virtual reality projects that CU students and faculty are working on.

Castleton History major Joseph Kinney praised the project for benefitting his education and the relationships he has built along the way.

"The Hidden History Project is the perfect example of when getting involved in campus activities and an institution-led project goes right. I can say with the utmost confidence that the friends I have made and the friendships I have deepened during my time involved in the Hidden History Project will last a lifetime," Kinney said. "The bonds I have formed with other students both within my major and in the AGAA (Archaeology, Geography, and Applied Anthropology) major are truly a blessing to me. Additionally, I have further honed my historical research and interpretation skills from participating in the project, and now I feel more confident than ever that I possess the necessary skills to become a published historian within the near future."

"Their enthusiasm and skill in sharing their knowledge with local kids are unparalleled," Moriarty said.

At the project's completion, Granger House will become a museum where the results of this work are shared with the public. The museum will feature interactive exhibits accessible to diverse populations, and Castleton students studying museum design are already engaged in the initial planning phases. Granger House will also function as a learning lab where K-12 students can interact with the ongoing research projects of CU students and faculty.

About The Hidden History Project

The Castleton Hidden History Project is funded by a National Endowment for the Humanities grant. It is a collaborative effort involving anthropological, historical, geographical, and archaeological research. The project studies the lives of people in and around Castleton from the end of the ice age to the present day, with a focus on the less-explored local histories of groups like Native Americans, African Americans, and women. CU professors and students have been engaged in this research since January 2022. You can follow their work at https://www.facebook.com/castletonhiddenhistory