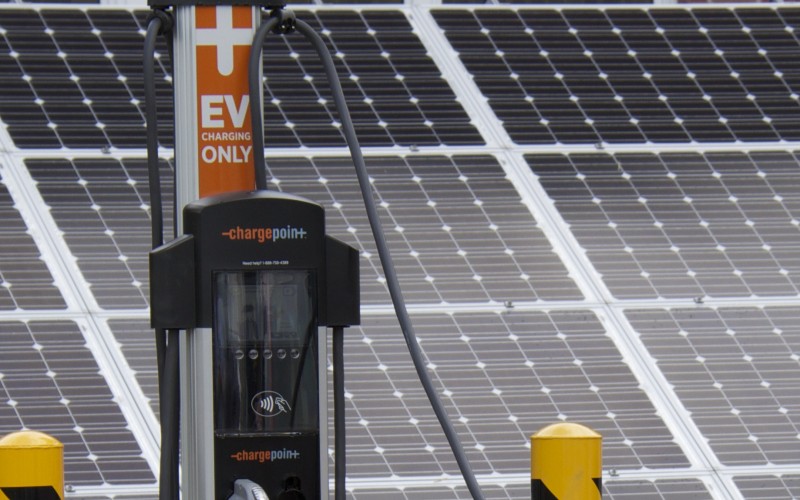 Castleton introduced the installation of the newest energy efficient projects on campus, a ground mounted solar array and dual-vehicle electric fueling station during a ribbon-cutting ceremony on Friday, May 23.

With a grant from Green Mountain Power and support from the Castleton Class of 2014 and Student Government Association (SGA), the university recently completed the installation of 36 280-watt ground-mounted solar panels and a Level 2 dual port ChargePoint electric car charging station on the south side of the Jeffords Science Center.

The project is part of Castleton’s Green Campus Initiative, working to find ways to reduce the university’s carbon footprint, and to become a leader in innovative alternative energy sources.

“With this array we have now installed 150 solar panels and four micro-wind turbines in two years,” Castleton President Dave Wolk said. “These new and exciting energy sources are an important step in keeping with our green campus initiative and reducing our carbon footprint. The project could not have been completed without the support from Green Mountain Power, but it is truly a student-driven endeavor with generous contributions from the SGA and the recently graduated class of 2014.”

The location of the array and station will provide for high visibility for students and visitors to the campus to provide educational opportunities and conversations about renewable energy.

In attendance at Friday’s ceremony was Elaine O’Grady, Director of the Air Quality and Climate Division of the Vermont Department of Environmental Conservation, and Renewable Energy Vermont board member Leslie Cadwell, along with partners from Green Mountain Power and Same Sun of Vermont.

“Castleton is really leading the way by setting an excellent example for college campuses across the country and also other businesses and organizations in Vermont,” said O’Grady.

In addition to congratulating the university on the new installation, O’Grady acknowledged both Castleton and Green Mountain Power for demonstrating the energy efficient lifestyle that is envisioned for Vermont.

“It has been wonderful to watch Castleton change and see the university become a real leader, not just in Vermont but around the country in terms of how to embrace renewable energy,” said Mary Powell, President and Chief Executive Officer of Green Mountain Power.

Powell spoke of the strong partnership between the university and GMP and applauded Castleton for its continued commitment to forming an energy efficient environment for students.

“It’s really about creating an energy community for the future,” she said.

Currently, more than 650 electric cars are registered in the state of Vermont, and Castleton continues to explore opportunities to expand its own fleet of Hybrid cars into the realm of electric and solar-powered vehicles.

The project installation was completed by Same Sun of Vermont, a privately held Vermont owned company located in Downtown Rutland.

“Designing and installing solar arrays with a car charging station is one of our greatest joys,” said Philip Allen of Same Sun of Vermont. “This is the fifth such installation sponsored by Green Mountain Power. Castleton’s array, located directly behind the EV charger, is a practical and visual reminder that we can run our vehicles on electricity and that we can get that electricity from the sun.”

ABOUT SAME SUN
Same Sun of Vermont, Inc. is a solar design and installation company established in 2011 by Rutland Town residents Marlene & Philip Allen, located in Downtown Rutland at 24 Center Street.   We are committed to using American-made products only, and see solar power as not only the engine to drive our energy independence, but as a way to revitalize our local and national economy.

ABOUT GREEN MOUNTAIN POWER
Green Mountain Power generates, transmits, distributes and sells electricity in the state of Vermont.  The company, which was named 2014 Solar Champion by Vote Solar, serves more than 250,000 customers and has set its vision to be the best small company in America.