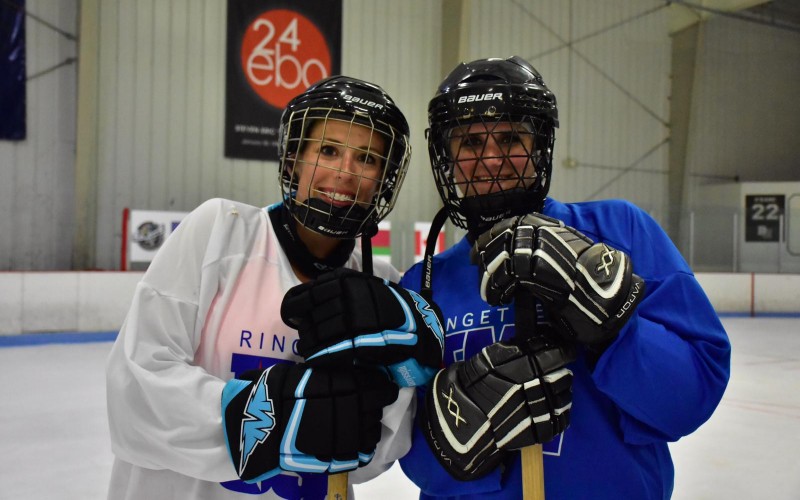 Castleton Women’s Ice Hockey alumni, Colleen Senecal and Brianna Stanford ‘10, were recently selected to compete for the United States at the 2019 World Ringette Championships in Burnaby, British Columbia, Canada. After continuous training and tryouts, the pair join 15 other players from across North America in an opportunity to take home the gold medal.

“We are honored to be part of this growing sport and to represent the U.S. as athletes on the world stage,” said Senecal.

Invented in Canada in 1963, ringette was created as a recreational activity for women. The sport is similar to ice hockey in terms of objective, playing surface, and number of players, but ringette is played with straight sticks and a ring rather than the distinctive curved sticks and puck traditionally found in ice hockey. Additionally, ringette has elements of basketball, for a shot or a change of possession must occur within the 30-second shot clock.

“The ring itself is much more difficult to catch than a hockey puck because the stick must ‘spear’ the inside of the ring to catch a pass,” said Senecal. “So, hand-eye coordination is very important.”

In the U.S., the sport has seen relative development since the 1970s. It gained attention along the border states and on the East Coast, and USA Ringette, the main organization behind the sport, strives to continue this growth.

“Athletes, young and old, want to be a part of a winning team, and are therefore more likely to try ringette if we can prove that we belong on the world stage,” Senecal said.

Played every three years since 1990, the World Ringette Championships showcases all-female teams from around the world in a multi-day tournament. The winning team is awarded the Sam Jacks Cup.

The U.S. National Team has been a prominent force in the tournament. The team has earned six bronze medals on the senior level since 1996 and took second place in the President’s Pool at the 2017 competition.

The two former Spartans train as early as 4:30 a.m. every day, while maintaining their professional careers as a nurse and supply chain manager respectively. Senecal added that both players credit their time as student-athletes at Castleton for instilling this mentality.

“Balancing the rigorous schedule of on and off-ice practices, classes, and mandatory study halls helped to prepare both of us for life outside of school,” Senecal said, who will play for a shot at gold alongside her teammates in the tournament slated to begin on November 25. “We believe in women supporting each other, both on and off the ice, and ringette is a wonderful way to do just that.”