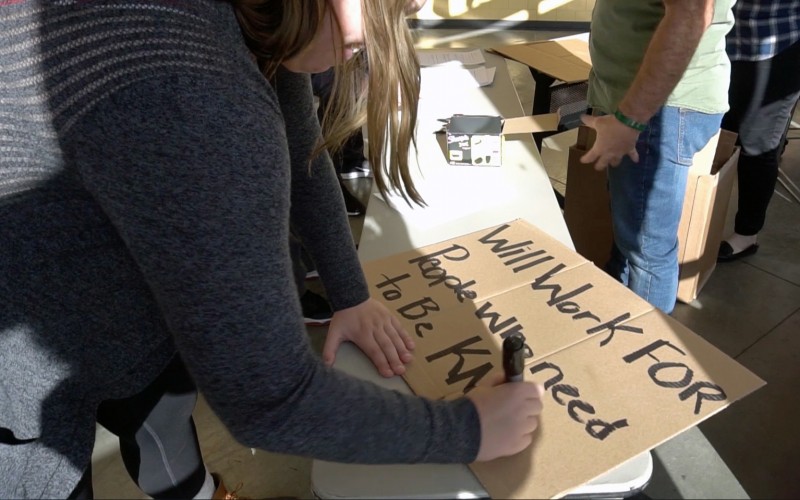 Castleton University’s student-led Content Lab has nearly completed a video campaign for the American Federation of Teachers’ effort to convince the state legislature to offer free college tuition for all.

“It’s an aspirational campaign playing off the theme ‘will work for food,’” DeForest explained. “Like a nursing student held up a sign saying ‘will work for fewer opioid addicted babies’ and a criminal justice student wrote ‘will work for national security.’”

Students the from various programs were spontaneously filmed in the university’s Campus Center after practice efforts by Content Lab workers in the TV studio, he said.

The students were given cardboard, markers, and a cap and gown as props.

DeForest said the group hopes to bolster the campaign in coming months by doing similar events with students from other state colleges across Vermont.

Professor Linda Olson, vice president of Education for AFT Vt., said she has seen a rough draft of the campaign video – and was very impressed.

“I think they did a great job. I really like it a lot,” Olson said.

Olson said AFT is working with Sen. Bernie Sanders’ director of labor and director of education and DeForest said the plan is to unveil the campaign video in January, when the legislature reconvenes.

They will use social media, including Sanders’ accounts, to spread it far and wide.

“They’re excited about it,” Olson said of Sanders’ representatives.

Hopes are to also use the students’ signs for an art installation at the statehouse in Montpelier.

“I think it’ll be really powerful when we get it up at the statehouse,” Olson said. “I’m excited to see what happens.”

AFT has been pushing for free tuition since 2011 and is hopeful the legislature will be moved to act this year, said Olson, who added that she plans to incorporate portions of the effort into a civic engagement class next semester.

VanBuren said each team member brings something to the table, mentioning Kopische’s video work, Rossi-Crete’s graphic design expertise and his photography skills as examples. He said the team is excited to have the opportunity to work with Sanders’ office.

“You’d expect opportunities like this at a larger university,” he said. “It’s a huge resume booster, especially if you’re applying for work in a blue state.”

AFT is the second client the group has produced work for, having done a PILOT project last semester with The MINT makerspace in Rutland.

Michael Talbott, chair of the Media and Communication Department who came up with the Content Lab idea, said he’s really impressed with the group’s work.

He said not only are clients like AFT and The MINT benefitting, students working in the Content Lab are gaining professional experience that will make them more valuable when they graduate.

He said in a small town like Castleton, where opportunities to intern at big agencies or firms are fewer than in major metropolitan areas, the Content Lab gives them a conduit to clients.

“It’s allowing them to serve real-world clients and make a difference in the world,” he said. “There’s no doubt these students will be extremely job ready.”