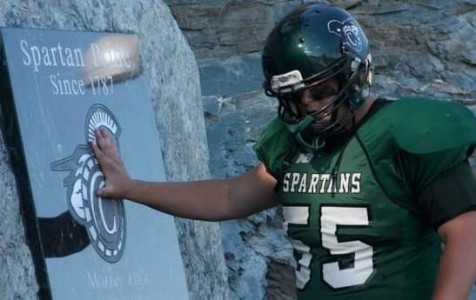 For Phil Hall, finding the balance between being a student and a student-athlete came easy. Phil, who was just as driven in the classroom as he was on the football field, found success in a career in education after graduating from Castleton with a degree in Physical Education.

“My love for the town of Castleton comes from my time as a student at Castleton University,” he said.

Phil, who earned a bachelor’s degree in Physical Education from Castleton and a Master of Education in Educational Leadership from College of St. Joseph, transferred to Castleton from another college as a sophomore.

“As someone who transferred to Castleton, being an alum means the world to me. To have left a school where everyone was miserable and to come to a place that people loved was really profound,” he said. “I met or became friends with some of my favorite people in the world while I was at Castleton, and we all still love Castleton with all of our hearts. We had an amazing time and we understand how much we grew while we were there.”

Phil credits professors Lisa Pleban, Deb Waggett, and Andy Weinberg with having a great influence on his education at Castleton and being “excellent educators.” He is close with former Castleton President Dave Wolk, who he cites as being “an amazing mentor to me as a young professional, educator, and leader.”

For Phil, the close-knit community is what sets the Castleton University apart from other schools.

“I think that students just felt really at home at Castleton. Faculty and staff were like family, everything was very tight-knit,” he said. “I haven’t seen that at any other college or university. Maybe within a specific program, but not the whole institution like it was at Castleton.”

Phil also credits Deanna Tyson and the entire Athletic Department and football coaching staff with helping him to earn success both on and off the field.

A standout player on the University’s football team, Phil played three seasons and earned MVP honors his final season. After hanging up his cleats, he joined the coaching staff as an assistant coach on the offensive line for two seasons.

“I had the opportunity to take on leadership positions during my time at Castleton, most notably as captain for a very young football team for two years, and as a coach on the football staff for two years. These leadership experiences also prepared me to take on a career in educational leadership,” he said.

Phil resides in Rutland with his wife (and fellow Castleton alum) Brittany, their son, Jackson, and their dog, Tyson.