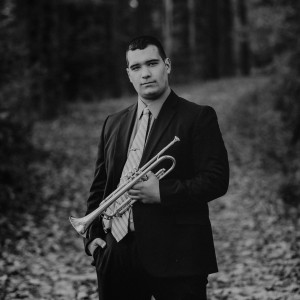 As a trumpet player who grew up in Poultney, Vermont, Cameron Wescott has been performing with various ensembles around the Castleton community for several years before attending Castleton. When it came time to decide what school he wanted to attend, Cameron felt very comfortable choosing Castleton because he “was aware of the environment here.” Although a little apprehensive at first due to Castleton’s smaller size, any doubts quickly flew out the window when he understood the wide array of quality performances being given in Casella Theater.

“Every day I am shown how incredible the students and faculty are here, and have never been shorted of an opportunity,” he said.

Among his biggest faculty influences are Dr. Heidi Welch, assistant professor and director of music education, as well as Professor Joshua Thompson, coordinator of instrumental studies and arts recruitment.

"They are passionate, caring, and manage to push my development further than I have ever thought possible," he said.

Beyond the relationships he has formed with his professors, Cameron also noted the close connections among students.

“Everyone has a general sense of caring for one another and that is something I plan to take with me into my career," he said.

Choosing to pursue a degree in Music Education was a natural choice for Cameron.

“Music has been something I have been involved with as long as I can remember,” he said. "There is never any doubt in my mind that I want to spend my life teaching music, and I am reminded of this every day."

In terms of the opportunities afforded to him at Castleton, Music Education majors are required to observe a number of current public school teachers as part of their studies. Additionally, many workshops, masterclasses, and numerous conferences are available to music majors. These teachings then culminate in their final semester before graduating which is spent as student teachers.

Despite his primary instrument being trumpet, Cameron has become a multi-faceted musician during his time at Castleton. He currently serves as the music director of Vocal Unrest, Castleton's acapella group; president of Castleton’s Chapter of the American Choral Director’s Association (ACDA); vice president of the National Association for Music Educators (NAfME); and president of the University Chorale and Chamber Singers. Outside of the department, he served as a Student Orientation Staff (SOS) leader for the first-year students during the 2021-2022 academic year. Off-campus, he is the music director, organist, and cantor at St. Raphael’s Roman Catholic Church and a member of Enerjazz as the second trumpet and male vocalist.

For Cameron, one of the greatest highlights of his time at Castleton has been its people.

“I will definitely remember the people the most. I’ve made an incredibly strong group of friends here and I think our bond will last a long time," he said. "If I were to get nothing else out of Castleton (which is not the case), the people I’ve met here would make it worth my time.”

As for his plans post-graduation plans, Cameron aims to teach in a public school setting – ideally high school – and plans to continue his education.

“Castleton has allowed me to expand on my goals, although they have mostly remained the same throughout my time here.”