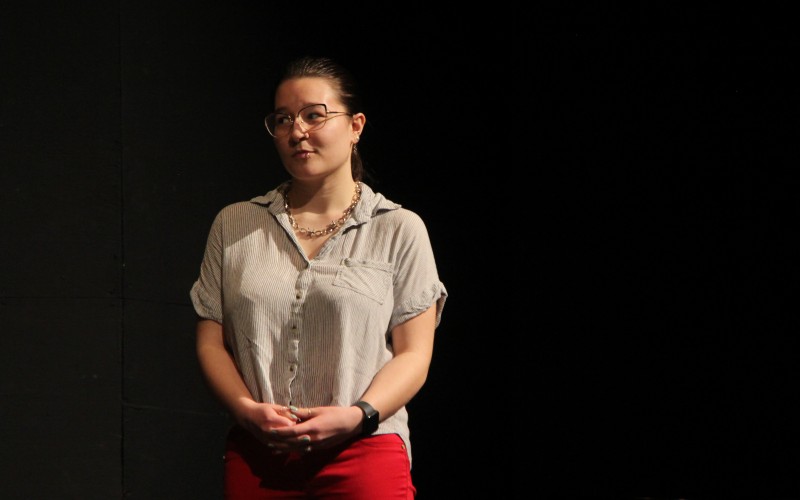 This story first appeared in the Castleton Spartan.

It’s 8:30 in the morning. After checking on all eleven piercings and putting on her mismatched socks, Trinity Robichaud hits the start button on her Toyota Prius. Before she leaves her grandparents’ house, she latches in the seatbelt for her guest in the passenger seat.

Her enormous bag of books.

With a slight whistle from the nearly silent engine, the shaking of her Dunder Mifflin sign hanging from the rear-view mirror, and a clunk when she comes to a stop, Robichaud and her worn-out Prius won’t be back until 6 p.m.

As a senior, Robichaud has to meet a capstone requirement for her degree. These options include writing a scholarly paper, creating a portfolio of creative writing, student teaching, or an internship. To meet the requirement, she only has to do one of them. She’s doing all of them.

“I want to explore my options,” she said.

Growing up in a religious, old-fashioned family, Robichaud “never got to go through a rebellious middle-schooler phase,” she said.

“I make jokes about my family being a religious cult,” she said. “Big family, very religious-sounding names. We’ll never find our names on keychains.”

For Robichaud, being rebellious was a game. If she went too far, it could’ve been a disaster. It started with her wearing makeup that got progressively brighter and stranger.

“Eventually I started wearing two different shoes, and the peak was when I had half my lips red, and the other half were purple. That was the extent of what I got away with,” she said.

As soon as Robichaud got to campus, she went with a friend to get her nose pierced.

“Then I dyed my hair teal, then purple, red, blue, and slowly accumulated more piercings,” she said.

Everybody knows that glorious feeling in elementary school when recess comes. Mobs of screaming kids rush out the door and run to the playground for their long-awaited break from the monotony of the school day. Some kids were playing basketball or four-square, others were playing tag or climbing on the monkey bars.

Then there was Trinity Robichaud, sitting on a swing with a book in her hand.

“I’ve always been pretty nerdy and bookish, even when I was little,” she said.

She read so much as a kid that instead of getting video games or toys taken away as punishment like other kids, she would get her books taken away.

“There was one time where I read a book that had a lot of language in it, and my dad found out about it and I couldn’t read for two weeks. That’s how nerdy I am,” she said.

Even as a youngster, she was reading some heavy books – or at least trying to.

Her parents didn’t want her reading books with “bad language” in them. One of these books just so happened to be one of her favorites, “Inkheart.”

“My dad busted me because there’s some language in it so he didn’t let me read the rest of the trilogy. I think I actually cried about it,” she said.

When she moved into Rutland at age 12, she was able to walk into town to a used book store. She bought all the books that she wasn’t allowed to read and hid them in her closet, which became her secret hideout.

“I would stay up all night reading all the books I wasn’t supposed to read, and now I’m smuggling them to my sister so she can read them,” she said.

She was also chosen for the McNair Scholars Program. At first, Robichaud was confused by this, because the program’s research project usually pertains to math and science, but she found a way.

“I put together a research project on dystopian fiction and connected it to social media,” she explained.

It’s through this interaction with the McNair Scholars Program that she got an idea. She wanted to explore all kinds of options for her degree.

In high school, Robichaud’s ideal day was spent in her room, locked away with her books. Having been homeschooled for two years at this point, she was living this ideal day every day, until her parents broke the news to her.

“My parents basically told me ‘you’re a cryptid, and you never leave, so we’re going to send you back to school,’” she said.

It turns out, the school they put her in was a very small private school. So small in fact, that she was the only graduate in her class.

“My parents said ‘you’re gonna have to make friends,’ and I was like ‘jokes on you I’m the only one in my grade level,’” she said, laughing hysterically.

She also said that constantly being in small environments made her used to it. Because of this, she was reality checked when she moved onto the Castleton campus for the first time. She quickly got the hang of it and started making a name for herself.

“Whenever someone asked me if I wanted to try something new, it was an automatic ‘no,’ and in my senior year of high school I started working on that,” she said.

Clearly, she’s worked on it well enough. Her advisor, Professor Flo Keyes, described her as being very enthusiastic about whatever she gets into.

“She really is excited about doing things, learning things, and experiencing things,” Keyes said. “She always has an expectation that ‘this is going to be cool,’ and because of that, it usually is.”

Robichaud’s cat crawls out from under her bed, and climbs onto the bed to sit directly under a poster for the TV show “Sherlock.” And next to it? A poster for “Friends.”

As for the cat? Its name is Morty. From “Rick and Morty.”

On the window sill? A sign for “The Grinch,” which is very fitting for her room which she dubs her “hobbit hole.”

“I’ve found people either really hate sitcoms or love them. I love them, I think they’re like comfort shows. I’ve watched all of “Friends,” “Seinfeld,” and “The Office,” those types of shows.”

Robichaud was forced into this room in her grandparents’ house in spring of 2020, when a certain pandemic took over the world.

Moving off-campus wasn’t an issue. The issue was that one of her siblings had taken over her room back home, so she was in need of a room to stay in. Her new room is actually her aunt’s old bedroom.

“When my aunt was in high school and my grandparents were out of town, she brought a bunch of friends over and painted the whole room absurdly,” she said.

Artwork covers all four walls of the room. The centerpiece of the room, right next to her bed, is her bookcase, although she is in the process of expanding it. Back at her parents’ house, she has a massive bookcase that she is “trying to steal back,” she said.

Hard work has always run in Trinity Robichaud’s blood. When she was in seventh grade, her English teacher gave her an award because she read so much and filled out so many reading logs.

“I’m pretty sure it was a made-up thing, but I did so many reading logs that he felt he needed to give me something,” she said.

This love of literature only grew. Now, she’s taking on a teaching writing course that has her observing a freshman English Comp class led by professor David Mook. This helps her understand university-level teaching by preparing presentations, planning lessons, and grading assignments.

“She is an eager learner and dedicated to helping others learn as well,” Mook said.

Mook, who is new to this dynamic, couldn’t be happier with how it has been going.

“I was hopeful this would be a meaningful learning experience for Trinity, for our students, and for me as well. I believe, thanks to Trinity’s efforts, that has certainly been the case,” he said.

Mook said that he’s learned a lot from his experience with Robichaud so far this semester.

“She is focused on her journey, and no doubt will succeed in whatever educational and career goals she decides to pursue,” he said.

In addition to being Robichaud’s advisor, Professor Keyes is also working with her on a creative writing portfolio.

“There’s around 25 to 30 pages of work,” Keyes said. “She had originally planned on just doing short fiction, but she sent me some poetry she did and we put them in the portfolio,” she added.

Keyes is baffled by the hard work Robichaud puts into day-to-day life. She is so baffled that she doesn’t see how Robichaud finds time for sleep.

“Free time is very rare,” Robichaud said. “I find time for friends and family, and I really like to read and write so I do that a lot, but a lot of the time that happens to be homework.”

“The term I’d use to describe her is joie de vivre, which is French for ‘having joy in life,’” Keyes said.

Because Robichaud isn’t busy enough, she is also interning at the Castleton library. She has spent a lot of time working in a broad range of work around the library with reference and instruction librarian Miranda Axworthy.

Axworthy helped Robichaud with her research project and has really gotten a chance to bond with her over the course of her internship.

Although Robichaud might not be certain what she wants to do yet, luckily for her she’s got a lot of people in her corner.

“She is focused on her journey, and no doubt will succeed in whatever educational and career goals she decides to pursue,” Mook said.

“Life’s not a straight line. To get to where you want to go, there’s always twists and turns but she’s totally capable of handling it. She’s a heck of a hard worker,” Axworthy said.

If one thing’s for certain, Robichaud has come a long way from her cryptid days locked away with her books.

“If freshman Trinity could’ve seen me doing this, she would’ve been like ‘no, that’s not you, that’s somebody else,’” she said.