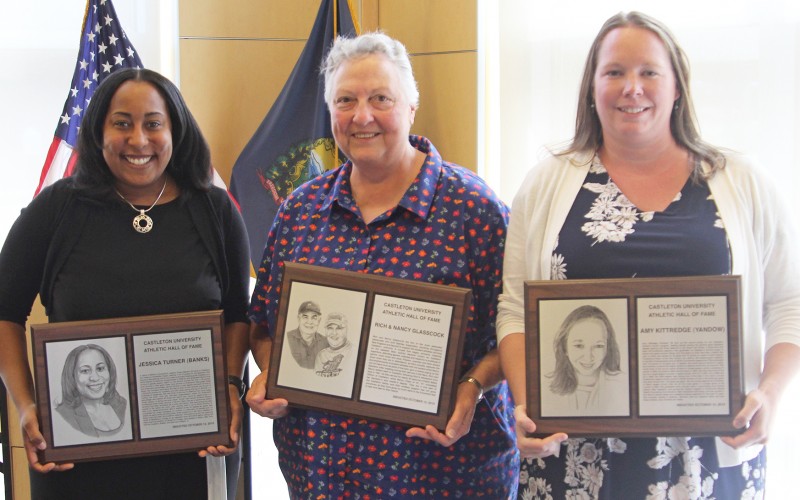 Five new members were inducted into the Castleton University Athletics Hall of Fame on Saturday.

Rich and Nancy Glasscock are two of the most dedicated and passionate Spartan supporters. A couple that began primarily cheering on the baseball team quickly became known as Castleton super fans, attending games, matches and meets for a multitude of sports – both home and away. Players, coaches, and fans always know when they are in attendance, as Rich proudly captures the accomplishments of student-athletes with his camera while Nancy can be heard from all parts of the field, gym, or arena cheering on the Spartans. After meeting during their service in the Navy, Rich and Nancy settled back in Castleton following Rich's retirement from duty in 1987. He served as a Public Safety Officer at Castleton for nearly 20 years, while Nancy, Class of '87, '91, completed her bachelor's and master's degree. They are a true part of the Castleton family.

Amy (Yandow) Kittredge '06 tore up the record books for the Castleton women's soccer program, seating herself among the all-time great Spartans despite playing just three seasons. A three-time first team All-Conference selection, she graduated as Castleton's all-time leader in points and goals scored, taking over first place on both lists after a stellar first year in which she racked up 32 goals and 73 points en route to North Atlantic Conference Player of the Year honors. As a senior, she helped guide Castleton to the NAC Championship and an NCAA Tournament appearance. She graduated with 175 points on 79 goals and 17 assists, and ranks second all-time in goals, third all-time in points and eighth all-time in assists at the time of induction. She holds three of the top six marks all-time for single-season points, amassing 73 points in 2003, 50 points in 2004, and 52 points in 2005. She also has three of the top four single-season records in goals scored, with 32 in 2003, 23 in 2004, and 24 in 2005. Her 2003 season was among one of the best in the nation, as she finished the season fourth overall in NCAA Division III with 3.48 points per game and sixth overall with 1.52 goals per game. Her six scores against the University of Saint Joseph (Conn.) tied her for the most goals in a single game in the country in 2003. She graduated with a double major in Psychology and Criminal Justice. Amy earned her master's degree in Community Mental Health Counseling from Southern New Hampshire University, and has worked in the field of mental health and substance abuse treatment for the past 10 years. She currently resides in Addison, Vermont, with her husband, Nate, and their three children, Ayla, Kendall, and Nolan.

A native of Milford, Connecticut, Jessica (Banks) Turner '09 came to Castleton and made an immediate impact on the women's basketball team, starting in all 27 games for the Spartans. She stayed in that starting role for four years, guiding Castleton to a North Atlantic Conference championship in 2008-09, and graduating tied for first all-time in games played, eighth on the all-time scoring list with 1,120 points, sixth all-time in field goals made, third all-time in three-point field goals made and three-point percentage, second all-time in total assists, and sixth all-time in steals. Her numbers have stood the test of time, as she remains one of just sixteen 1,000-point scorers for Castleton and still ranks among the top 10 all-time in a multitude of categories. She had three of the top 10 seasons from long range, holding the sixth, ninth, and 10th best single-season marks for three-point percentage and drained 63 threes her senior year – good for eighth-most in a single season. A strong two-way player, Turner was named All-North Atlantic Conference three times, earning a Second Team nod as a sophomore before landing First Team accolades as a junior and senior. She was among the best guards in the nation her junior year, ranking ninth in all of NCAA Division III with a 2.21 assist-to-turnover ratio in addition to her 4.6 assists per game. She completed her career averaging 10.1 points, 4.4 rebounds, 3.8 assists and 1.6 steals per game while knocking down three pointers at a .361 clip in addition to being a two-time NAC All-Academic selection. She went on to join the coaching ranks at Middlebury College as an assistant from 2013-2018 before taking the head coaching position at Skidmore College. She resides in Wilton, New York, with her husband, Robert, and their son, Robert, Jr.

Brandon Heck '09 made a name for both himself and for Castleton hockey during his four-year career with the Spartans, helping vault the team into the national rankings during the 2006-07 season. A three-time ECAC East All-Conference selection, he graduated as Castleton's all-time leader in games played, goals, assists, points, power-play goals, and shorthanded goals. At the time of induction, Heck still ranks second in games, goals, and points while ranking third all-time in assists and shorthanded goals. He led the team in total points in each of his four seasons and remains tied for the program record with three shorthanded goals during his junior year. Heck was also a standout in the classroom, earning ECAC East All-Academic honors three times. In his rookie year, he made a splash with 25 points in 26 games, scoring seven times – six of which came on the power-play – while assisting 18 goals. His sophomore campaign saw him double his goal total to 14 with a pair of game-winning goals and one game-tying goal. He was at his best against stiff ECAC East opponents, registering 25 points in 19 conference games during the 2006-07 season. His junior year was his best year statistically as he notched 16 goals and 18 assists. A two-way player, he scored three times on the power-play and three times shorthanded while netting three game-winners for the Spartans. He capped his senior year with 11 goals and 18 assists, finishing his record-setting career with 121 points on 48 goals and 73 helpers. After graduation, Brandon has stayed involved in hockey by coaching at the Bantam AAA and Junior A levels in western Canada. He resides in Camrose, Alberta, with his wife, Sarah, and their two children, Palmer and Pearson.