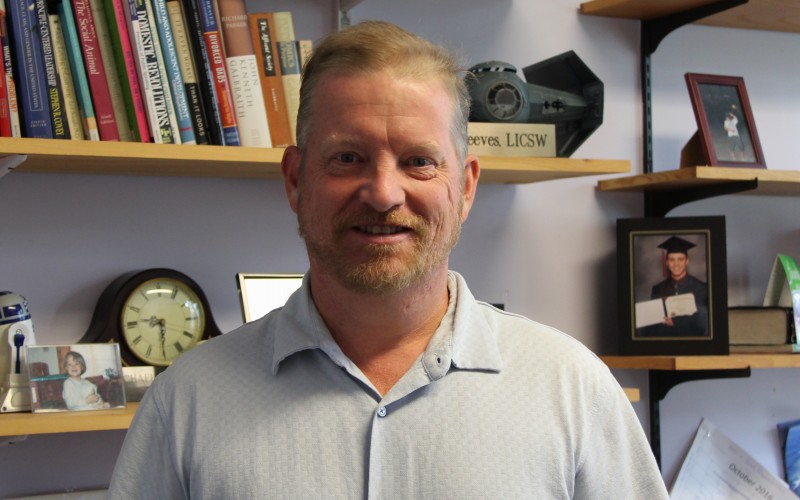 A research project from Castleton University faculty member Dr. Michael Reeves aims to give a voice to homeless adolescents.

Reeves, assistant professor and social work program director, has spent the past three months on a research project that will use photography to help homeless teenagers tell their story. Student researcher Rowie Budde is assisting with the project.

“Typically, you don’t get much first-person perspective from homeless teenagers. They need to be part of the decision-making process on how they are treated and programmed for,” Reeves said.

The project seeks teenagers to tell their stories through photography. Teenagers who participate will take pictures of things in their life over three weeks that are meaningful to them and help them cope with the difficulties of homelessness. At the end of the three-week period, participants will meet with Budde discuss how they chose their pictures and the meaning behind them.

Because the confidentiality of the subject of pictures must be maintained, the final project cannot use identifiable pictures of people, which means the particular meaning of many photos must be explained.

“The goal is to develop some insight into what we can do as adults who are trying to help these young people deal with a difficult situation - utilize what the kids themselves say they need for support,” Reeves said.

Reeves completed a similar project in Rhode Island as part of his doctoral dissertation, and believes the Rutland Region will benefit from it as well.

One of the biggest challenges in this project is getting the word out to potential participants. In Rhode Island, it took him about a year to get the first participant, but he ended up with 13. He has been at work for three months in Rutland to find someone willing to take part.

“Teenagers are seen as a vulnerable group, and there are gatekeepers. I can’t directly talk to a minor without parental permission, and sometimes being homeless can feel embarrassing,” Reeves said. “Once you get one or two to participate in the project it snowballs.”

Reeves uses posters and partnerships with local organizations, such as Homeless Prevention Center, Community Care Network, and Rutland Public Schools to get the word out.

“Everything is ready to go with this project. I just need participants. That was the main struggle the last time and it’s becoming the main struggle this time,” Reeves said. “It usually takes one or two kids in the community to get on board. They start talking to their friends and suddenly I have enough to make this a viable research project.”

In the end, Reeves hopes the project helps homeless teenagers improve their situations.

“Whenever you do qualitative research with a group, what you are researching is unique in its own way,” Reeves said. "I want to give them the opportunity to speak though this project to the adults that could be influential in their lives.”

At the end of the project, two pictures from each participant will be displayed at an art exhibit that will be open to the public.

“I see these young people as having a lot to share, but frequently they are not being asked. This helps give them that voice,” Reeves said.