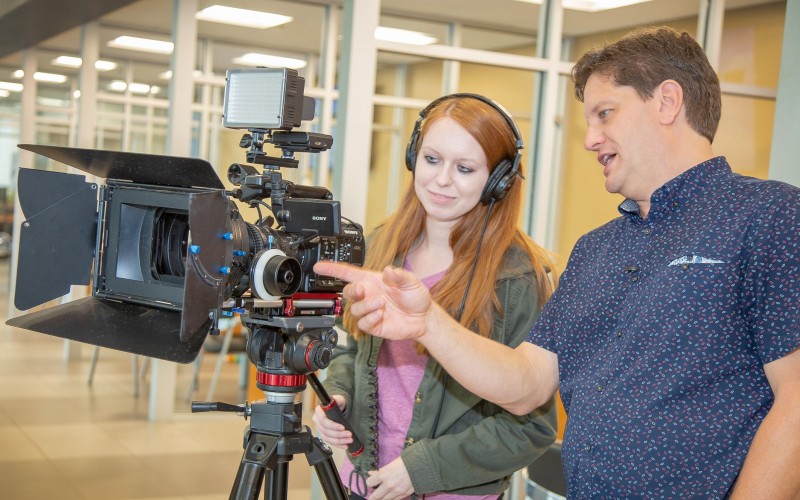 Castleton University student Molly Marcy was one of 30 students from across the country who attended the Santa Barbara International Film Festival earlier this month.

Marcy, a junior studying Video and Film Production, first heard about the Festival’s Film Studies Program – a symposium for undergraduate students spanning five days — through Castleton’s Media and Communication Chair Dr. Michael Talbott. Marcy completed the application process, which included writing two movie reviews, ranking the last three movies she watched, and writing a brief piece about why she should be selected to travel to Santa Barbara.

During her time at the Santa Barbara Film Festival, Marcy had the opportunity to view some of the more than 200 films being shown, attend panels with notable industry professionals discussing topics ranging from directing, producing, writing, and women in film, participate in question and answer sessions with filmmakers, and partake in private sessions with professionals in a classroom environment.

The experiences that stick out most to Marcy are the panels featuring women in film, including a women filmmakers session and a women’s panel and luncheon.

“It was incredible to see all of the sound editors, directors, producers who are women. To have lunch with women who are Oscar nominees for me was like, ‘Ok. We can do this,” she said. “The film industry is 90 percent men, so it was very encouraging as a woman.”

Marcy also attended a producer’s panel, which featured professionals who worked on films including “A Star is Born” and “Green Book.”

She also found herself in the same room as some of Hollywood’s most respected artists during tribute sessions, including actress Melissa McCarthy Melissa McCarthy, who was awarded the festival’s Montecito Award for her contribution to the film “Can You Ever Forgive Me?” and Glenn Close, who earned the Maltin Modern Master award.

“This symposium is a really special opportunity for a student like Molly, who’s driven to be a filmmaker but faces challenges in rural New England,” Talbott said. “Through this program, she was able to closely interact with and learn from working filmmakers and industry professionals and gain the connections she needs to break into the film industry.”