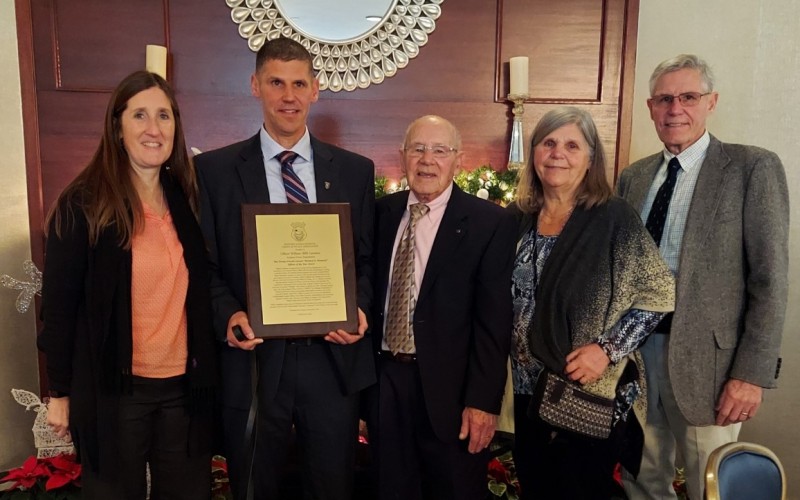 William Laramee ’93 was awarded the Richard Werenski Officer of the Year Award by the Western Massachusetts Chiefs of Police Association in December.

The award was established to “recognize a police officer in Western Massachusetts who has demonstrated within [their] department, the highest standards of professional conduct, and diligence to duty, loyalty, honesty, and integrity as a police officer,” according to the association.

He founded the Amherst Police Youth Adventure Academy, a summer program for local youth which provides lectures and interactive demonstrations by Amherst and UMASS police officers in areas such as defensive tactics, law, and crime scene investigation.

He has been a patrol officer for the town of Amherst since 1995 and is the officer in charge of the department’s bicycle unit as well as founding the department’s Comfort Dog Program as a part of his position as the neighborhood liaison officer.

In his role as neighborhood liaison officer Laramee spends the majority of his patrol time speaking with local residents who are most affected by the behavior of college students from UMASS and Hampshire colleges. He has formed relationships with downtown business owners, college administrators, and the community at large to promote safety and well-being of the student population and the Amherst community.

Supporting his liaison efforts is Winston the comfort dog. Winston is a crucial part of his plans to foster positive relationships between community members and police officers. Laramee and Winston visit with off-campus students to engage with them about how they can help stop the spread of COVID-19 while distributing masks and information.