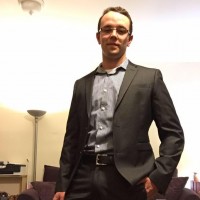 A positive, community-based experience has been the basis for many students finding success at Castleton. alumni Alex Adams is no exception after earning his History degree.

“I had several schools in mind, but my decision became easy after visiting the campus and researching faculty members,” Adams said.

Coming to Castleton as a transfer student from a larger school, Adams pictured his experience solely focusing on going to class, studying hard and earning his degree without becoming heavily involved in campus life. His expectations were shattered as he arrived on campus and instead found himself immersed in the unique social and academic community Castleton provides for its students, with a focus on community-mindedness and civic engagement.

An active member of the Project 240 steering committee, Adams provided valuable input on how to increase civic engagement among students at Castleton. Throughout his time on campus, he also served as the Treasurer of the Democratic Leadership Club, President of the History Club, and is co-wrote a paper for submission into the 2016 New England Political Science Conference.

Adams credits his professors for encouraging him to consider post-graduation plans, leading him to his discussion to attend graduate school. Adams said History, Geography, Economics, and Political Science Professors Adam Chill, Trish Van Der Spuy and Rich Clark provided him with great opportunities throughout his schooling, along with Professor Judith Robinson who has also served as a helpful resource for his interest in economics.

“All of my history professors go out of their way to help me out and I am always surprised at how much time and effort is afforded to me,” Adams said.

These are the involvements that have paved the way for a remarkable educational experience for Adams, which is something he values deeply.