Master of Arts in Education: Curriculum and Instruction

Master of Arts in Education, '15 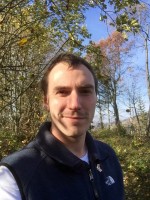 Former graduate student Kevin Kareckas received a once in a lifetime opportunity to teach abroad shortly after receiving his diploma in May of 2015. After leaving Castleton with a Master of Arts in Education, he took this experience to Rzeszow, Poland, where he is working as a Fulbright English Teaching Assistant teaching English to Economics majors at the University of Rzeszow.

Kareckas attended Wheelock College in Boston for his undergraduate studies and has since always felt that education would be a huge part of his future and his career; However, it was Castleton’s Education department that most contributed to his commitment to the field of Education.

“Education is my window to the world and my life's work. I discovered this while working on my MA in Education (Curriculum and Instruction) at Castleton,” Kareckas said.

Kareckas has had an endless amount of support from the Castleton community.

"For me, Castleton University is synonymous with family," he said.

This consistent support across several departments, faculty, and staff members on campus has influenced his attitude of teaching in immeasurable ways, both in and out of the classroom. It is with great pride and confidence that he can say Castleton helped shape him into the person he is today.

With the name change to Castleton University, Kareckas believes it will continue to be successful, reflecting the high-level of education the institution provides its students.

“The transition to a university is an accurate representation of the top-notch graduate education that I received at Castleton; moreover, it depicts a vision of the future of the institution,” Kareckas said.

For Kareckas, Castleton’s Education program was so unique and helpful in that he was able to tailor his degree specifically to his interests and work. Yet, what he found most helpful it wasn’t just the flexibility of the education he received at Castleton, but the people he was able connect with and the amount of engagement he had when he wasn’t in the classroom.

“I am confident that the university will remain dedicated to its goal of providing the best higher education possible to a global community of learners while continually paying homage to learners in Vermont,” Kareckas said. “I graduated from a state college that felt like a small university.”